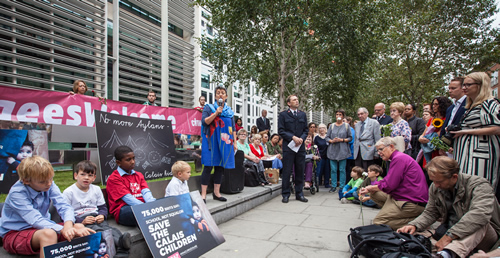 On the anniversary of the death of Aylan Kurdi, the leaders of Reform, Masorti and Liberal Judaism, council chiefs and celebrities called on the UK government to avoid more deaths and bring in 387 eligible refugee children from Calais immediately.

Rabbi Laura Janner-Klausner led the memorial prayer at the vigil outside the Home Office which urged the government to speed up the arrival of 178 refugee children who have the right to come to the UK because of their close family links in the country and a further 209 children eligible under the terms of the “Dubs” amendment. All these children are currently stuck in Calais.

Rabbi Laura Janner-Klausner, Rabbi Danny Rich and Rabbi Jonathan Wittenberg joined bishops, imams, local government leaders prepared to host children without family in the United Kingdom, the families of those children stuck in Calais, and actors including Juliet Stevenson and Vanessa Redgrave gathered to remember the hundreds of children who have also lost their lives since the death of Aylan Kurdi.

Rabbis Danny Rich and Janet Darley then joined other faith leaders to deliver a letter to the Home Secretary, Amber Rudd with the full list of the 387 children eligible for transfer with a request that Ms Rudd take immediate action.

Under the Dublin III Treaty which governs EU asylum applications, the UK has a legal obligation to take in unaccompanied refugee children who have family in this country and since a landmark ruling in January some 40 have arrived. But Citizens UK, the national community organising charity, has details of an additional 178 children who qualify to come here but are stranded in the camps in Calais.

In addition, the “Dubs” amendment to the Immigration Bill provided for an unspecified number of children who are the most vulnerable and without family in Europe, with valid claims for protection, and having arrived in Europe before March 20th, to be transferred to Britain. Initial registration efforts by Citizens UK in Calais have identified 209 such children who should now be eligible for transfer.

Lord Dubs, the Labour peer and long- time refugee campaigner, who came to Britain as a child on Kindertransport programme to escape Nazi persecution, said:
“I am deeply saddened that despite repeated calls from me and others the government still seems to be dragging its feet on the commitments it made when the amendment in my name was accepted. Now that the new government has had some weeks to settle in after the EU referendum vote there really is no excuse for any further delay. Theresa May and Amber Rudd should be taking immediate action.”

To date the only children transferred from France to Britain have been those with family here in the UK, largely those children supported by Citizens UK through its Safe Passage partnership. This process takes months and at the present rate it will take over a year to help the 178 children identified. To date not one child has been transferred from France to Britain under the wider provisions of the Dubs amendment.

The actor and campaigner, Juliet Stevenson, said: “In the last year the British people have shown that they want to welcome more refugees here. While our government has acted in some commendable ways – notably through its commitment to resettle 20,000 Syrians by 2020 – in other regards it has not shown the generosity to refugees it should. On this painful anniversary, when we remember a tiny Syrian boy lying drowned on a Turkish beach, a death which shook the world, it would be appropriate for the Prime Minister and Home Secretary to act to help stranded refugee children. We are only talking about fewer than 400 children. How can it be argued that Britain cannot cope in providing new homes for these children?”

Rabbi Laura Janner-Klausner, Senior Rabbi to Reform Judaism said: “When Jews look at refugees, we see ourselves. We remember our recent past as migrants and refugees and also that we were refugees from Egypt. We are commanded and compelled to defend other refugees.”

Rabbi Danny Rich, Senior Rabbi and Chief Executive of Liberal Judaism said “Judaism teaches that saving a human life is like saving the entire world. The Government should act accordingly”
Rabbi Jonathan Wittenberg, Senior Rabbi to Masorti Judaism, said “My mother, Isca Salzberger-Wittenberg said to me yesterday: ‘I came to Britain as a refugee aged 16 in 1939. I am acutely aware that I owe my life to the generosity of others. Had they not stood as guarantors to enable me, my sisters and family, to fulfil the legal requirements to enter this country, neither I nor they would be alive today. I grew up with this legacy and a profound sense of the importance of giving to others today what others gave to our family back then”