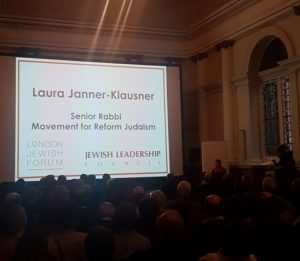 On Sunday 9 October London Jewish Forum and the Jewish Leadership Council marked the 80th anniversary of the Battle of Cable Street with an event at Shoreditch Town Hall. A series of speakers including the Mayor of London, Sadiq Khan, Rabbi Laura Janner-Klausner, Orthodox Chief Rabbi Ephraim Mirvis, Rushanara Ali MP, General Secretary of the TUC, Frances O’Grady, and Ruth Smeeth MP addressed an audience of 150 people, talking about the impact of the battle and what it means for our society today.

Three veterans of the Battle of Cable Street were presented with an award to thank them for their contribution to fighting fascism and the legacy they have created for the Jewish community.

All guests were asked to sign a pledge to combat all forms of racism, antisemitism, islamophobia and fascism wherever they are found and commit to building communities that value diversity, embrace difference and promote tolerance.

He was here, leading the way. He was extremely tall, broad shouldered, with a deep, commanding voice. He loved Jews, Britain, Israel and he absolutely loathed fascists. He was here as a national politician as well as a leader of the Jewish community. He’d just been the MP for Whitechapel and St Georges and at this time of year, at Yom Kippur, he’d walk from synagogue to synagogue, giving sermons about Jewish rights, love of Israel, and fighting fascism. I just discovered that in 1935, he stood as the joint Liberal and anti-fascist candidate.

My grandfather, Lord Barnett Janner, z”l,served this area with pride, and fearlessness. I can still hear his voice, defending Jews and attacking those wicked blackshirts. As my grandmother, Elsie, wrote in his biography, “Barney had been denouncing fascism for several years – and here it was at his doorstep”. At the time of the Cable Street Battle, he campaigned for a change in British law so that anyone who slandered a whole community, like Mosley’s fascists, could be prosecuted. It took until 1965 for this law to be enacted.

Grandpa Janner (as we called him) would be proud that we’re remembering that battle. A battle not just for Cable Street, or for Jews, or against fascism, but for the very core nature of diverse Britain. A battle that we’re still fighting.

On Yom Kippur afternoon, we’ll read Lo t’aamod al dam rechecha, We can’t be passive when our brothers and sisters are threatened. We must never be bystanders.

Today’s not a commemoration. Today’s a call to action. It’s a shofar blast. The Battle of Cable Street is not over.

It’s now our turn to muster just a fraction of the courage shown by these veterans with us today. They showed then that hateful extremism wouldn’t be tolerated. We must show that it never will be tolerated.

Along with his comrades and allies, my grandfather taught his children and us, his children’s’ children, to advocate for the rights of the oppressed, to stand up for Jews, for Judaism, Israel and for the vulnerable in society of whatever religion, colour or background. As was the case then, so it is now. We will always challenge bigotry, racism and fascism. This is his legacy, this is the legacy of Cable Street.