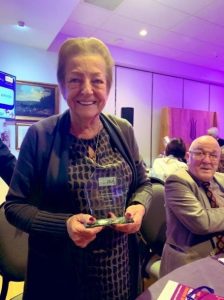 We are delighted to announce Jenny Jankel as the new President of North West Surrey Synagogue (NWSS).  Jenny, is a founder member of NWSS.  She has been Chair of what she describes as “our precious and beloved community”, 3 times. Her four children and now several grandchildren have all grown up at the heart our community.

Jenny says, “When NWSS was founded, several families locally were searching for a Jewish home and learning from Harry Cohen z”l, our first President and mentor, allowed all of us to grow and flourish. He has been a major influence in her life and stepping into the space that he and Dennis Lewis z”l have left is awe inspiring”.

She is Chief Executive and Chair of the Trustees of the Jewish Music Institute (JMI).  Jenny wears many, many hats at North West Surrey Synagogue including sitting on the social committee, helping our membership to grow and flourish, and heading up our highly valued Share and Care team.

On the 4th of December Jenny was awarded a lifetime achievement award at the Jewish Volunteer Network (JVN) Awards ceremony 2019. Part of the citation that won Jenny her richly deserved lifetime award read ‘Wherever there is a need, Jenny can be found at the centre, providing support and care and making a profound difference to peoples’ lives’.

It is for these and so many other reasons, that we know that Jenny was the natural choice to be the next President of our NWSS community.