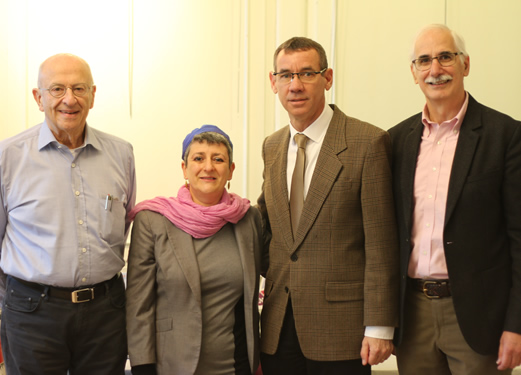 Ambassador Regev spoke in conversation with Rabbi Laura Janner-Klausner, Senior Rabbi to Reform Judaism, and responded to questions from representatives of 35 Reform communities from across the country.

Paying tribute to the Ambassador’s passion and sincerity, Rabbi Laura Janner-Klausner introduced him noting the “golden opportunity to spend time in real conversation… a privilege to engage in dialogue”.

Ambassador Regev spoke of his experiences of Jewish life in the UK paying tribute to the things British Jews “do better than anyone else”, including the work of the CST, schools, Jewish Care, Limmud and an outstanding tradition of philanthropy. He noted that these achievements are particularly important given the relatively small size of the Jewish community. The Ambassador also stressed the importance of grassroots, bottom up engagement and advocacy.

Responding to questions about the position of Progressive Judaism in Israel, Ambassador Regev urged members to view the glass as being “half full” noting a dynamic and momentum that is moving in the right direction. He pointed out that it is always the policy of Israel’s government and Prime Minister to respond with condemnation to inflammatory and delegitimising statements.

He acknowledged the complex political situation but repeated Prime Minister Benjamin Netanyahu’s statement that all Jews should feel at home in Israel, in Jerusalem and at the Kotel. He also noted the role of the Supreme Court in protecting Progressive Jewish rights and the growth of “more and more Reform congregations with more and more members”.

On the important question of the peace process, Ambassador Regev stressed that whilst there are no quick fixes, there is good news and that Israel is now talking to more Arab governments than ever before, describing relations with Egypt and Jordan as “warm and intimate” and better than they have ever been.

The Ambassador noted that real change is underway with governments of Arab states with whom Israel has no diplomatic relations. This is a very new development but due to a convergence of interests, Israel is increasingly seen as a partner against radicalisation and extremism.

Thanking Ambassador Regev for his work, Rabbi Laura Janner-Klausner presented him with a hand-signed letter from Sir Moses Montefiore as “a gift and an emblem of respect and love” from Reform Judaism.