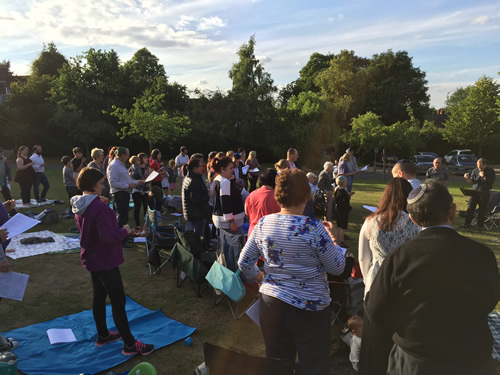 On a warm, dry Friday night this July, the field at the back of the large church in Radlett was filled with Erev Shabbat song.

Chair of the synagogue, Irene Blaston, commented “it was great to see so many people relaxing and enjoying Shabbat together from young children aged just a few months to some of our elderly members, including a 94 year old.” The large crowd was joined, via Facebook live stream, by remote synagogue members as well as members’ families in Israel and around the UK.

On the following Shabbat morning Senior Rabbi, Paul Freedman led a “walking service” – a walk into the beautiful countryside just outside Radlett, stopping for key prayers along the route using a siddur he had created for the occasion, linking images of places visited to the prayers.

Rabbi Freedman, explained “At Radlett, we, like several other Reform synagogues are bucking the national trend of traditional synagogue membership decline and are growing at a significant rate. Currently over 850 families, many of our 2,300 members are young and looking for innovative, new and often informal ways to express their Judaism.”