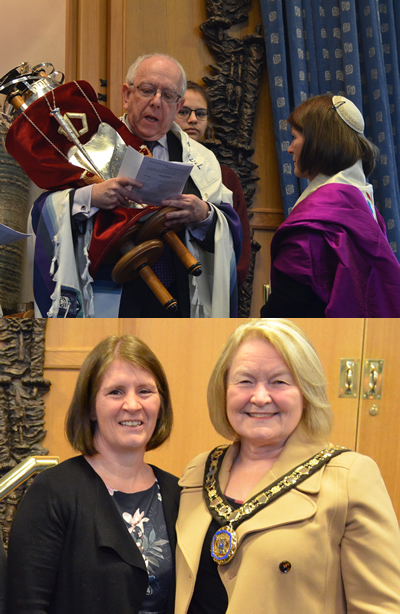 North West Surrey Synagogue (NWSS) welcomed over 300 guests on Sunday, 14 January 2018 for the Induction of Rabbi Kath Vardi, the largest attendance ever at the shul.

Distinguished guests included the Mayor of Elmbridge, local clergy from several religions, representatives from the Movement for Reform Judaism, Liberal Judaism, Leo Baeck College and other rabbis. Also present were many founding members and their families, celebrating the start of a year of festivities marking the synagogue’s 50th Anniversary.

Following welcome remarks by Chairman Ian Lancaster, a short study in chevruta, or pairs, was led by Rabbi Josh Levy, who is the Rabbi at Alyth. Rabbi Levy also led the Mincha Service, with singing support from Rabbi Hannah Kingston, a classmate of Rabbi Vardi’s at Leo Baeck College.

Rabbi Middleburgh injected some humour into the solemn induction by paraphrasing Rudyard Kipling’s poem ‘If’, noting that Rabbi Vardi ‘should always have a grip on the situation’, and if she didn’t, any of these four rabbis would help her get one.

Rabbi Vardi gave the Closing Blessings and the event ended with a lavish tea.

Ian Lancaster said that it was a delight to see the synagogue so full and hoped that it wouldn’t be another 50 years before this happened again. “It was an honour to have three of the College’s senior staff and two of our previous rabbis (Rabbi Bayfield is both) to induct Rabbi Vardi,” he said. “This was an indication of the high regard she is held in by her teachers and colleagues, as well as the strong connections our community retains with its previous rabbis.”