At their June AGM, 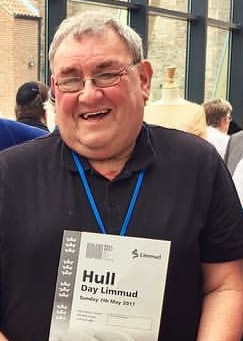 Ian joined the Shul back in 1986, the roles he has served as are Treasurer, Senior Warden and vice chair and currently been in the Chair for the last 12 years.  Ian also became the Chair of the Northern Synagogues in 1991 and was the only one to ever serve three years in that position.

During Ian’s time as the Northern Chair, Ian was also the Northern representative member of the National Council of RSGB, as Reform Judaism was then known. Working with David Jacobs and Sandra Vigon, Ian was the driving force behind the establishment of a Northern Field Worker, the Northern Education Centre and the Northern Weekend, now known as Northern Chagigah.

Not only did Ian ensure that the northern synagogues were recognised nationally, he also promoted Hull as a thriving and forward thinking community which was rooted in tradition, but responding to change. This recognition continues today and Hull really shows what small Jewish communities can achieve.

Ian was instrumental in the Shul being given charity status in May 2000. This status has meant that the Shul has received about £37,500 in gift aid over the past 17 years.  Ian was the Head Teacher of the Religion School for nearly 20 years, only retiring when the last bar mitzvah was carried out.During that time, Ian not only taught the top class every Sunday morning, He also gave up his spare time during the week to teach the bar and bat mitzvah children. Between 1990 and 2008, Ian taught 18 Bar and Bat mitzvahs.

More recently in 2010, Ian gained recognition from both Reform Judaism and Liberal Judaism for Hull to hold classes to educate and develop those wishing to convert to Judaism.
Ian was also recognised as an approved educator.

Since 2014, He has successfully supported eight people on their journey to Judaism, and has accompanied each of them to the Beit Din in London for their final interview. For many years, Ian read all the Torah portions during the Shabbat Morning Services.

Ian is also the Jewish Lay Chaplain for the Hull and East Riding NHS Trust and has been a frequent contributor to Radio Humberside’s religious programmes, including regular “Pause for Thought” for over 10 years.

He has managed to achieve all this while looking after his family and working miles away from home Hull. The amount of time, devotion and own expense he has given to the shul and Jewish people in Hull and UK is remarkable.