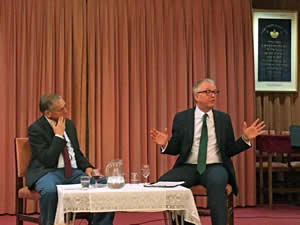 Labour MP Ian Austin, who is being investigated over his behaviour during a row about the party’s anti-Semitism code, narrowly missed calling his leader an anti-Semite.

He told a packed audience: “I can’t look into his heart and really know, but he has said and done things which are anti-Semitic. There is a long history of Jeremy mixing with terrorists and anti-Semites. Then there was the grotesque mural in East London.”

The MP for Dudley North, whose father arrived in the UK as a 10-year-old boy from the former Czechoslovakia – his mother and sisters were murdered in Treblinka – said: “People think Jeremy has fought racism all his life, so when he is criticised they think it can’t be true and it has to be a plot. It’s really insidious so many people are being sucked into saying things which are anti-Semitic in support of Jeremy.”

Ian Austin is facing possible suspension after the argument with the party’s chairman Ian Lavery, was deemed ‘abusive conduct.’

When asked what he actually said, he said it was a “heated discussion over the party’s failure to adopt the International Holocaust Remembrance Alliance definition of anti-Semitism. He said: “I probably used language you would not repeat in synagogue, but we have got ourselves into a terrible position.

“The Labour party thinks it knows best. The Labour party is the last party to be re-defining the definition. Do they really want a hearing about this? It’s an attempt to silence me. If people try and shut you up you have to come out fighting and stand up for what’s right.

He said he grew up listening to his father talk about the Holocaust. He said: “They have to kick the racists out. I am appalled and ashamed the party I joined as a teenager has caused such offence. We should do everything we can to put it right.”

“What we have now is way beyond the mainstream traditions of the Labour party. They want to turn the party into a hard left Marxist party.” When asked he said he would not be confident on Mr Corbyn winning an election.

He said in spite of the lack of Jewish people in his constituency, he was constantly approached in the street and told what the Labour Party was doing was a “disgrace, adding: “do not under-estimate the support there is out there for the Jewish community.”