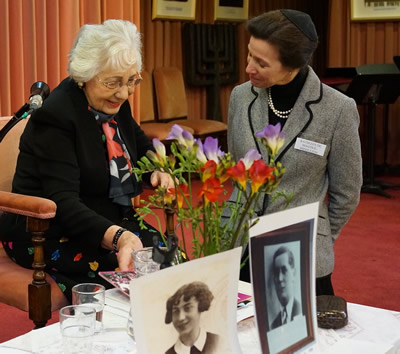 Holocaust survivor Helen Aronson, one of only 750 Jews who miraculously survived the Łódź ghetto, spoke to a hushed audience of 49 pupils who attended Holocaust Memorial Day at Mosaic Reform Synagogue last week as Jane Harrison explains.

She spoke movingly of her father, who was tragically gassed at Chełmno concentration camp, together with all of her home-town’s children, whom he had volunteered to accompany, as well as her lucky survival, with her mother and brother who were all slave workers.

Based on the Northwood Holocaust Memorial Education Day, which has united a number of synagogues and reached out to over 3,000 youngsters in the past decade, the day included a Holocaust Memorial Trust film and workshops where youngsters were encouraged to take part and think about all the aspects of the Holocaust.

Helen was born in Pabianice, near Łódź, Poland on 24 April 1927. In May 1942 all the Jews from Pabianice were evacuated to the notorious Łódź ghetto. Helen, who went in, at the age of 12, with around 200,000 people, said: “It’s a miracle that I am alive. At the end we hid in an underground bunker. It was twelve below zero and we had no food”.

She said she raised a plank and stared into the face of a Russian soldier, on the very day she was about to be killed. She said: “I saw the graves that were ready for us. He said to us:’the war is finished and you are free.’ I cannot describe that moment”.

Her poise and girlish giggle belies the trauma and horrors she faced after a childhood she said was “sweet and carefree,” adding: “It is not easy for me to record five years of hell in 45 minutes.” She said the minute the Germans entered her town, only two days after declaring war on Poland, the “mayhem started.” She spoke about the segregation of people who were unable to work, the old and disabled and trams arriving to take them away. She said: “There was screaming and shouting, people crying. It was a most terrible sight”.

She was told she would be safe if she worked hard in an almost bizarre situation. She said: “We had money, concerts, hairdressers, but at the same time people were dying in their hundreds from hunger and illness. Every so often there would be transport for people sent away, we were told, to work in Germany. When the orphanage closed and all the children were sent out in lorries, some called my name, something that will stay with me all my life”.

She said the aftermath was difficult. In 1946 she was brought to London by an uncle, with no English, and eventually married George Aronson, also Polish, and has two daughters and two grandsons.

She has lived and worked mostly in London, except for a few years in the 1950s, when her husband worked in Nigeria. Helen spends much of her time talking to schoolchildren about her war experiences. She is active in the Association of Jewish Refugees and Age Exchange, which recently produced a play and a film of her life, acted by children.

She said: “I hope that my survival, and teaching children from different backgrounds and nationalities about the horrors of World War II, will remind them that we all must be tolerant, and seek out tyrants whose aim is to kill, for no reason at all”.

Rabbi, Kathleen de Magtige-Middleton of Mosaic Reform Synagogue, who welcomed everyone and thanked everyone involved in the day, said: “What a privilege it is to have a Holocaust survivor here to share her story. We want you to remember her words when you leave here and tell your friends and family what you have heard today.

“In the future, when you some across negative stereotyping and prejudice, remember Helen’s life story. All of us are unique in some way or other. We all value people for being who they are. When those differences are not valued, then discrimination creeps in and can get out of control”.

During the workshops youngsters were told Holocaust Memorial Day aimed create a better, safer future. They explored why the Holocaust took place, who collaborated and who simply stood by and how the Jews were stripped of their dignity and identity to de-humanise them.

At the end pupils, from Preston Manor School, Wembley, John Lyon, Harrow-on-the-Hill and Queen’s Park Community school, Brent, wrote their feelings and what they had learned on postcards which were passed on to Helen who lit a memorial candle during a minute’s silence.