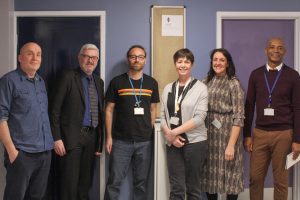 Jonny, works for Leeds Youth Justice Service and, to mark Holocaust Memorial Day, he organised an event at his work.

The event had a number of different elements to it.  One of these was a photographic exhibition about the ‘Auschwitz albums’, one showing the processing of a transport from the Tet ghetto in Hungary, the other showing camp guards and staff enjoying a day retreat in the countryside near to the death camp.  Both albums date from summer 1944.  The photos were shown in juxtaposition with each other with explanatory videos explaining each album playing on a loop in the room. A further photographic exhibition in the same room showed that genocide was not confined to the Holocaust but has happened before and since the Second World War and still happens today.

In addition, there was a bank of PCs showing videos of survivor testimony. The testimony was not just from Jews but also Roma.  Several Roma young people attended the event.

Jonny also invited Rabbi Strasko to to address the young people and his colleagues.

Rabbi Strasko talked about how a genocide takes a 100 steps to reach but can only start with an individual and then more individuals taking the first step.  He talked about the importance of choosing to take a positive first step to ‘build someone up’ rather than a negative step  to ‘tear someone down’.  For the  young people he spoke specifically about online comments and the danger of an individual negative comment being the first step to individual negative action and, ultimately, negative collective violence. This clearly had an impact on the young people. Jonny reported that many who would not usually sit still for five minutes, were rapt with attention for a full twenty minutes.

Rabbi Strasko had received many invitations to talk at various events to mark Holocaust Memorial Day, but, happily, Jonny got in first.  It is through events like this that young people’s minds can be changed and educated. This is, for Rabbi Strasko, important and fulfilling, and has an impact that may not be achieved by other styles of commemoration.

The final element of the event was a craft table where young people and staff could make a flame to add to the display and write a pledge to always remember what happened and challenge hate.

Overall, about 20 young people attended as well as  30 of Jonny’s colleagues and other workers. The following day,  a few more people saw the photographic exhibition and heard the testimonies. This included a group of mothers who have been struggling with their young people’s aggressive behaviour. The value of Jonny’s and Rabbi Strasko’s work was also recognised by the Director of the Ministry of Justice Policy Unit who happened to be visiting Leeds. He met with Johnny for about 15 minutes and seemed impressed and very interested.

There was also a very personal aspect of the exhibition- a booklet containing postcards sent to Betty and Sonia Feinkuchen by their parents, Julius Feinkuchen and Hedwig Feinkuchen (née Kaczka). Hedwig was the paternal aunt (father’s sister) of David Cohen, Jonny’s paternal grandfather.   This makes Hedwig Jonny’s great-great aunt and Betty and Sonia, his grandfather’s first cousins.

During Jonny’s research for the event, he rediscovered the story about what happened to this part of his family during the Holocaust. The booklet gives a snapshot of the experience of Julius and Hedwig in the months leading up to and just after the start of the Second World War. It was contextualised as referring directly to Johnny’s relatives. Because this was somebody the young people know, it was less remote, something real.  Jonny was delighted that it really worked. He initially printed out 30 copies for Holocaust Memorial Day then had to print out a further 20 the following day.  Everyone who looked in asked for and took away a copy of the booklet.

“Everyone” Jonny said, “has been deeply moved by the contents and the story it tells of separation and loss, hope, then fading hope and, ultimately, silence and tragedy. All in all, the event was, I think, a success and there is no doubt that Sonia and Betty’s postcard collection was a centrepiece for all who attended.  I am pleased that I have been able to keep the memory of Hedwig and Julius (and the others mentioned in the cards) alive”