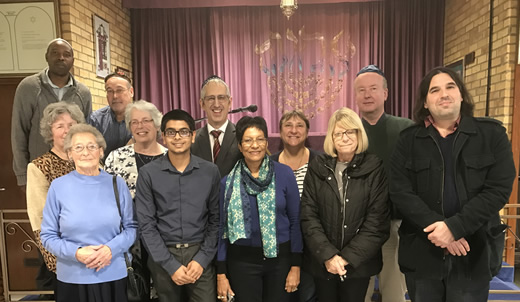 Representatives from the Hindu, Islamic, Buddhist, Catholic and Jewish faiths.

This event brought leaders from the Hindu, Islamic, Buddhist, Catholic and Jewish communities together.

There was a Jewish service of worship in Hebrew and English, with readings from the other faiths too.

Nishall from the Hindu community said: “It is fantastic to be hosted by Harlow Jewish Community; it is great to see all the faiths coming together to pray for peace and community cohesion. I believe this really shows the true multiculturalism that Harlow has and we should be proud of”.

Rabbi Irit Shillor who led the service said: “Sometimes we think we’re much better at trying to persuade others of our opinions than listening to theirs. In our conversations and debates, we should, if possible, abide by the Jewish tradition of argument for the sake of heaven, which demands profound respect for other human beings. Each of us was created in the Divine image, even if we disagree their opinion. We must have respect even in disagreement. If we must argue, we should do so not only with respect and for the sake of peace, but also with humility. We may need to ponder the view of the other to clarify our own, and hear divergent viewpoints presented in a constructive way that can help everyone learn and grow”.

Bringing faiths together is a large part of all the community groups and the organisations such as the Harlow Ethnic Minority Umbrella (HEMU) helps greatly to facilitate this.

HEMU Manager said: “It is really important that community groups come together as it helps to strengthen our communities and helps to bring cohesion in a time of political unrest around the world, supporting the each other in the community is very important because it helps build community understanding and tolerance”.

The event concluded with a chance for faith leaders to meet with members of Harlow Jewish Community.