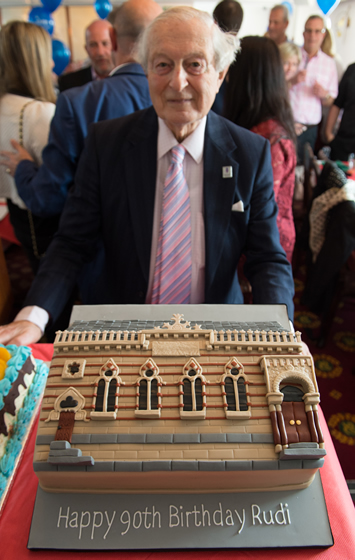 Rudi Leavor, Bradford Synagogue Chairman celebrated his ninetieth birthday at the Sweet Centre Lumb Lane Bradford on Sunday 5 June in the company of his family and many friends numbering over 100 people from across communities in Leeds and Bradford.

David Jacobs, former Director for Synagogue Partnership at Reform Judaism, whose father was a lifelong good friend of Rudi’s since they first met 68 years ago, spoke about Rudi and his work as a Jewish leader in Bradford and in bringing the city’s many communities together.

A presentation was made by Jonathan Lewis to Rudi on behalf of the Movement for Reform Judaism.

Richard Stroud, great grandson of Rabbi Dr Joseph Strauss, the first Rabbi of the Bradford Synagogue, made a presentation to Rudi of a historic photograph showing Rudi, his father and Richard’s grandfather Oswald Stroud.