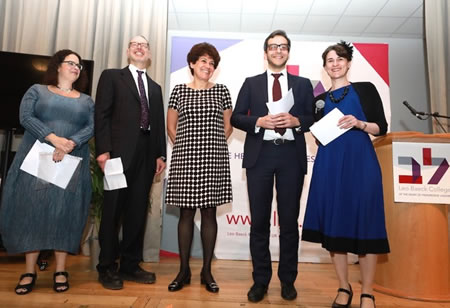 Leo Baeck College (LBC) celebrated 63 years of service to the Progressive Jewish community with a fundraising dinner at West London Synagogue on 15 May.

The guests, both long-time friends and new supporters of the College, were addressed by Professor Stephen Toope, Vice-Chancellor of the University of Cambridge, who spoke about the importance of focusing on what values society expects to see reflected in universities and not just value for money.

LBC Chair Dr Stephen Herman said: “The dinner was an excellent way to mark the success of the past 63 years of the College and we were thrilled with the outcome of the evening, which raised £40,000 for our exciting future plans”. Rabbi Dr Deborah Kahn-Harris, Principal of the College added: “Leo Baeck College is the only fully validated and accredited Jewish seminary in the UK and the funds raised will help us continue to train rabbis and educators equipped for the 21st century and to nurture and develop Progressive Jewish thought”.

LBC Dean of Students and Director of Jewish Studies Rabbi Dr Charles Middleburgh noted that this year’s graduates would be going on to serve Liberal, Masorti and Reform congregations in the UK and other parts of Europe, demonstrating that LBC really is the heart of the intellectual and spiritual life of the Progressive Jewish community.

The audience were delighted and moved by the personal stories of this year’s four graduating students:

“The middle years of my time at Leo Baeck College are inextricably linked to my late partner Deborah Lynn Steinberg’s illness, decline and death. Deborah had encouraged me very strongly to pursue rabbinic ordination. My cantorial studies had been some of the best years of my life, and I wanted to experience that kind of intellectual and spiritual excitement again. And that is what the College provided for me, for five challenging and wonderful years.

“The College was unfailingly supportive of my continuing as a student, despite the barriers to it that were occasioned by my daily commute from Birmingham and by Deborah’s increasing needs. I will never forget the kindness of the College administration and faculty during that period. I began my studies at LBC having been ordained as a cantor by Hebrew Union College in 1990. The continuation of my long commitment to Jewish life as a rabbi is impossible to disentangle from the warm relationships and professional support of my classmates, teachers, and colleagues. I am immensely proud of my association with LBC.

“I recall in no particular order the teaching of Charles Middleburgh, Deborah Kahn Harris, Mark Solomon, Alinda Damsma, Laliv Clenman, Melissa Raphael, Tali Artman, and Marton Ribary, and others as well, all of whom profoundly influenced my understanding of Jewish life. For five intense years, Leo Baeck College has been my home. It truly is the heart of British Progressive Judaism, and not only here but increasingly in the wider Jewish world as well.

“As we move towards the dispersal of our class into the wider Jewish world, creating our roles as rabbis in our communities, I feel the sadness of leave-taking, but even more, an immense gratitude for the experience I have shared with this (and I don’t use the word lightly) holy community, by which my life has been profoundly transformed”.

“A few days ago, I was lucky enough to visit Mount Nebo, the place where supposedly Moses looked at the Promised Land he would never reach. It was a very meaningful moment for me, as I am sure my ordination will be, a long awaited moment.

“When I first stepped into the College I was petrified by fear, and I can share with you an intimate moment, when, in October 2014, I was feeling desperate in Charles’ office and quite sure I wouldn’t be able to ‘make it’, to reach the top of the mountain!

“‘Making it’ meant for me being able to absorb all the knowledge but also be confident that I would be a’ good enough’ rabbi!

“Over the years, and with the help of excellent and devoted professors and tutors, I have become someone that I can look at the mirror and say: ‘good enough and will still improve’!

“This has been my journey over the last five years, very steep and emotional but rewarding and blessed as well. So I am deeply grateful to this amazing, inspiring and high-quality institution, but above all to the people who created this program, taught us and supported us, allowing people like me, in their mid-life, French and mostly secular, to become a rabbi. For now, a big yasher koach and l’chaim to Leo Baeck College!”

“I wrote my rabbinic thesis on sleep in Jewish thought, scooping up ideas and methods from every class and experience I’ve had over the last few years.

“My research included notions I first encountered in a philosophy class, techniques for analysing rabbinic texts acquired from years of thrice weekly Gemara classes, readings of midrash inspired by a rather wild but utterly brilliant class, an understanding of Jewish liturgy and the festival cycle using techniques borrowed from psychoanalysis and anthropology, a survey of halachic codes relating to sleep, attempting my own translation (with help!) of some passages of Kabbalah, (I think) original research on the origins of the shabbes schluf and a painful-to-write but meaningful introduction and conclusion which allowed me to marry my experience of bereavement with my academic concerns. I could only have done this at LBC”.