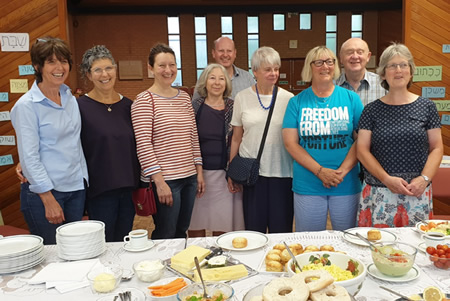 On 21 July, the Social Action Group of Newcastle Reform Synagogue (NRS) held a brunch in support of cyclists linked to Freedom from Torture, as Alison Cookson explains.

Freedom from Torture provides medical and psychological care for survivors of torture in the UK. The group cycled 865 miles in 19 legs from Hastings to Edinburgh, stopping for brunch in Newcastle.

Find out more about the ride here.

Members of NRS Social Action Group heard about the two women who had initiated this fundraising and awareness venture. Moira and Shelagh are a retired social worker and doctor from Edinburgh. Moira described the training she had undergone to prepare for the ride including yoga, pilates, a personal trainer and considerable dedication. Neither was a regular cyclist prior to this marathon and had found the daily ride increasingly demanding.

The group thoroughly enjoyed the food provided and there was enough left over to make food parcels for their ongoing journey the following day. The gathering also included representatives from the local supporters’ group of Freedom from Torture and NRS will maintain links with the local group to help support those refugees traumatized and in need of ongoing support.

Chair Linda Scott gave the visitors a short talk about the synagogue’s history and opened the ark so that one of the Torah scrolls could be shown.

This was a most positive occasion and Moira, one of the cyclists said: “All in all, this ride project has turned out to be the catalyst for some wonderful collaboration across communities in the UK. Would that it was always this easy to enthuse people about the need for acceptance of difference in our communities and the need for support for those who have experienced things that most of us cannot even imagine”.

The event was part of the Social Action Group’s ongoing support of the four refugee charities Newcastle Reform Synagogue has sponsored over the past two years and since Mitzvah Day 2017.