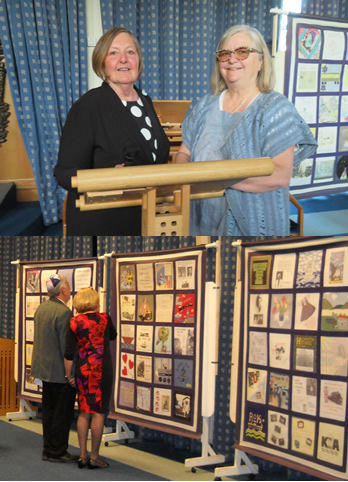 The theme this year was ‘Recalling the Journey through Folk Art’, focusing on the Kindertransport. The Traveling Exhibition of Memory Quilts, created by the Kindertransport Association was on display, visiting the UK for the first time ever from the Holocaust Memorial Center in Farmington Hills, Michigan in the United States.

Anita Grosz, who facilitated the Memory Quilt Project, was the featured speaker. In addition to readings of poems written by Kinder children, a short film, ‘Strangers Smiled at Me’ was shown. The subject of the film, Walter Kammerling, is the father of NWSS member Peter Kammerling.

The programme closed with a moving rendition of ‘Zog Nit Keyn Mol’, ‘the Partisan’s Song’, sung by Mr. Kammerling on video.

At the conclusion, attendees were invited to place the thimbles they were given on arrival in NWSS’ Holocaust Memory Suitcase, specially created and used for Yom HaShoah, as the shul’s observance of the custom of placing a pebble on the headstone of a grave.

In an amazing coincidence, one of the quilt squares featured a picture of Kinder boys who were housed in Belfast. Walter Kammerling was one of the boys in the picture!

Jean Cohen, Yom HaShoah Chair said: “We were thrilled to have the replica quilts here in the UK, even for a little while. We thank Melissa Hacker and the Kindertransport Association, and the Holocaust Memorial Center for making it possible. And we thank Anita Grosz for sharing the quilts’ story with us”.

Share This
Categories
Recent Posts
If you have any questions or queries, please don't hesitate to contact us. You can find full details for each of our departments on our contact page...
Get In Touch
Copyright © 2019 The Movement for Reform Judaism - All Rights Reserved
Company Registration Number: 07431950, Charity Number: 1139806
Affiliated with the World Union for Progressive Judaism &
the European Union for Progressive Judaism
Web Design by Friendly Gorilla
This website uses cookies to improve your experience. We'll assume you're ok with this, but you can opt-out if you wish.Accept Read More
Privacy & Cookies Policy