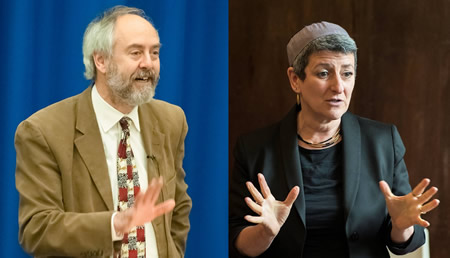 Nine reasons for being Reform and one reason for not

Come and listen to two leading exponents of Reform Judaism explain why Reform communities across the UK are expanding.

They will be discussing and debating a number of topics, including:

• Jewish belief and identity – a Reform perspective;
• Reform Judaism’s attitudes to women;
• The challenges of Jewish status; and
• How best to combine Jewish tradition with the modern world.

Rabbi Dr Jonathan Romain MBE – minister of Maidenhead Synagogue. Author of several books on the history of British Jewry and Reform Judaism. He appears on radio and television, and is a columnist for The Jewish Chronicle and The Times.

Rabbi Laura Janner-Klausner – Senior Rabbi to Reform Judaism. Over 30 years’ experience as a Jewish educator in Israel and the UK. A regular broadcaster on television and radio, including Thought For The Day and The Big Questions.

This event welcomes both members of Leeds and Bradford synagogues and non-members.
There is no entry charge. All we ask is for members to bring a non-member with them (whether a member of another synagogue or unaffiliated).

Share This
Upcoming Events
If you have any questions or queries, please don't hesitate to contact us. You can find full details for each of our departments on our contact page...
Get In Touch
Copyright © 2019 The Movement for Reform Judaism - All Rights Reserved
Company Registration Number: 07431950, Charity Number: 1139806
Affiliated with the World Union for Progressive Judaism &
the European Union for Progressive Judaism
Web Design by Friendly Gorilla
This website uses cookies to improve your experience. We'll assume you're ok with this, but you can opt-out if you wish.Accept Read More
Privacy & Cookies Policy