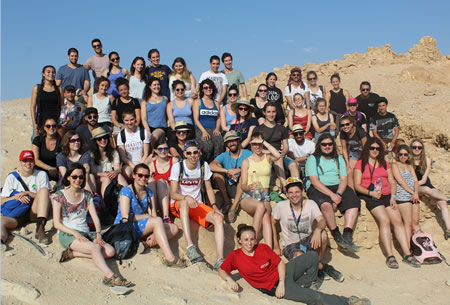 I signed up to the UJIA Progressive Birthright trip with a sense of trepidation. I’d never been to Israel before and was somewhat nervous. What would the political situation be when I was there? Would I be safe? I was conscious both that I didn’t grasp the political situation and its complexity -and maybe worried slightly that a Birthright trip might skirt over this.

However I’d wanted to go to Israel for years, and the opportunity to go with a Progressive Jewish group, with other young people of a similar age, to explore a country so rich in history and culture, and which is so important to modern Judaism couldn’t be passed up.

The trip was brilliant. From climbing Masada and sitting on the old rock as the sun came up, to wandering through the old city of Jerusalem, and exploring places like King David’s tomb (which just happens to have, in the same building, a former mosque and the room in which some believe the Last Supper took place), to staying on a kibbutz and discovering the waterfalls of Ein Gedi, every day was packed with experiences I will remember for a long time, and a lot of beauty, fun and history and culture.

I found the times we spent time doing Jewish activities incredibly special. Welcoming in Shabbat in the outdoors overlooking Jerusalem’s old city, attending a session at the Pardes institute and small group discussions which occurred throughout the week really enriched my trip – and will stick in my mind.

I also really appreciated the care and attention to detail that had gone into the trip’s organisation. We heared from the Women of the Wall movement, went to the Yitzhak Rabin centre, had an update on the political situation and heard from Rabbi Haim Shalom, a Reform rabbi at Hebrew Union College – all of which situated the places we were visiting in modern life.

Again, having six Israelis of our age on the trip was brilliant both for the better understanding of Israeli life which it far us, and, of course because of the friendships it gave us the opportunity to forge.

Now back in the UK, I have made friends who I know will last – and for that I am so grateful to the UJIA Progressive Birthright trip. I have also established what I am sure will be an ongoing relationship with the country of Israel, and a dialogue with the complexities, wonders and challenges of modern life there, which I hope will continue and grow with me.