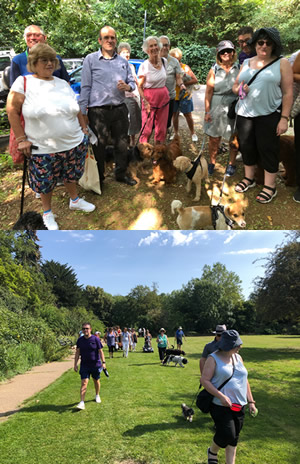 The first of Elul is the Jewish new year for animals, according to Mishnah Rosh Hashanah 1:1. In Temple times it was the time that tithes should be calculated on flocks and herds.

Just as Tu B’Shevat, the time for tithes to be calculated on the produce of trees, has in recent years become the festival of appreciation of trees, Edgware and Hendon Reform Synagogue decided this year to make the approach of the first of Elul, which begins on Sunday 1 September, as a time to appreciate our animals. Thirty-eight members of the synagogue and twenty of their dogs celebrated with a community dog walk in Cannons Park, Edgware.

The dogs ranged in size from Chihuahua to Alsatian. Rabbi Mark Goldsmith, Senior Rabbi of EHRS said: “It was remarkable how well the dogs got on with each other. It was as if they were celebrating being out together as a pack with virtually no barking and all of them trotting along happily.

“During our stops on the one hour walk we studied the Jewish concept of Tzaar Baalei Chayim, the duty to treat our animals with kindness and prevent any distress to them, and passages from Talmud and Midrash which speak about the antics of dogs and the need to be careful how we live with them. One particular favourite was the episode in Talmud Bava Kamma 21b in which a dog takes a cake from an oven which is smouldering and succeeds in burning down a barn. We spoke about how our animals enable us to calm down from the pressures of the day, provide companionship and that rare thing – unconditional love. It was of course also a great way for members of the synagogue to get to know each other”.