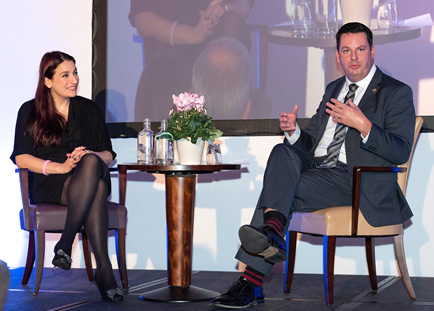 Religion and politics were on the menu as MPs Luciana Berger and Andrew Percy spoke warmly of their experiences of Jewish life at Reform Judaism’s Annual Dinner on 14 October.

The parliamentarians interviewed each other in an innovative and engaging format in front of over 200 guests at central London’s Grand Connaught Rooms. The dinner was supported by long term sponsors Investec.

Whilst differing in their responses to the question of how we will talk about Brexit over our Shabbat dinner tables in ten years’ time, the two MPs had much to agree about in a conversation covering their earliest Jewish memories, experiences of Progressive Judaism and responses to anti-Semitism.

Andrew Percy, MP for Brigg and Goole, spoke of the warm and welcoming attitude he experienced on converting to Judaism and noted the crucial role played by those Hull Reform Synagogue members who have also chosen to become Jewish.

Discussing concerns about anti-Semitism in the UK, Ms Berger noted that anti-Semitism “needs to be a fight for us all” and represents a very strong indication of challenges facing all of society.

Mr Percy echoed her comments stressing the need for moderates to work together, adding that “Britain is a good country for Jews”.

Three community members from diverse backgrounds gave moving testimonies on the impact Reform Judaism has made and continues to make on their lives.

Zach Klement, 19, from North West Surrey Synagogue, spoke movingly: “I have autism and have struggled with my mental health, yet RSY-Netzer have always made sure that I was included and made an effort to understand and support me… I was able to happily participate at camp, go on Israel tour and more recently I was able to lead on camp… being part of this Reform Jewish community has pushed me to be the best version of myself”.

Linda Scott, Chair of Newcastle Reform Synagogue stressed the national reach of Reform Judaism in her appeal noting that although the community has a high level of engagement from its members, “our community could not survive without continued input and support from Reform Judaism”.

She concluded: “Reform Judaism is the root of all our communities large and small, from which we can grow and continue to thrive. It is our network, our family our parent, our teacher, our guide and inspiration”.