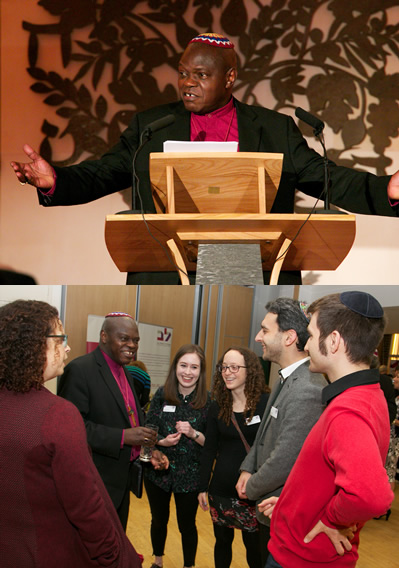 The event was part of the 60th anniversary celebrations for Leo Baeck College, the preeminent institution for the training of Progressive Jewish rabbis and educators, of which Rabbi Dr Lionel Blue OBE z”l was the first alumnus in 1958.

The Archbishop started his address by praising Rabbi Lionel Blue who died in December at the age of 86 after a long and distinguished career.

The Archbishop said: “As you all know, Rabbi Lionel Blue was a man of warmth, humanity, faith and wisdom. His wonderful ability to share the truth and humour of his experience of life and God endeared him to audiences across the world.

“People of many faiths and people of no faith were given a glimpse of how God makes himself real and present in the midst of confusion and pain – but also more particularly in the midst of the humdrum ordinariness of daily life.”

He went on to deliver a powerful lecture, entitled ‘Wisdom, Futility, Death and Time: the Voice of Religion in the 21st Century’. It can be read in full here.

The Archbishop covered topics including knowledge as a commodity, the explosion of social media, celebrity culture, globalisation, nationalism and terrorism – drawing on Jewish and Christian texts and traditions, as well as writers from the worlds of religion, philosophy, art and psychoanalysis.

In one passage, he explored the Jewish word ‘simcha’, which appears in Ecclesiastes 17 times: “It isn’t easy to give a precise translation of simcha. It doesn’t mean pleasure, satisfaction, gratification, amusement, entertainment or even happiness. It means ‘joy,’ specifically the joy we share with others. When the book of Deuteronomy talks about festivals as days of national rejoicing, it uses the word simcha.

“When Jews today talk about a wedding or a barmitzvah, they say, ‘we’re having a simcha,’ meaning a joy we share with friends and the community. You can find happiness in solitude but you can find joy only in the company of others.

“In an age in which even phones are smart but all too few people are wise, there is an abiding wisdom in Ecclesiastes that speaks to us, here and now.

“The pursuit of self will not satisfy even the self. We need the Divine other to open our eyes and hearts to the human other. And there we will discover simcha, the joy that only exists in virtue of being shared.

“Work, love, community, the things that connect us to others, are where Ecclesiastes found, in the midst of mortality, signals of transcendence. They are still there, waiting for each of us, endowing life with meaning and lifting us beyond the siren song of self.”

Speaking after the event, Rabbi Dr Charles Middleburgh, Dean of Leo Baeck College, said: “Rabbi Lionel Blue, z”l, was a most loved rabbinic colleague and a friend through the radio to hundreds of thousands of people throughout the UK.

“His interfaith work was core to his being, so we were absolutely delighted that the Anglican Church’s second most senior cleric, the Archbishop of York, Dr John Sentamu, gave such a
fascinating and insightful inaugural lecture in his name.”