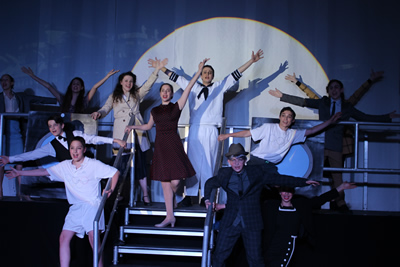 This production was full of wit and silly shenanigans with lively and memorable musical numbers such as the famous “Diamonds Are A Girl’s Best Friend”. The light-hearted musical, which was made into the iconic film which shot Marilyn Monroe to stardom starred Abi Wander as Lorelei, its heroine, the seminal gold-digging “dumb blonde”, and Abi Aleksander as Dorothy, who wants to marry for love.

The production was directed by Ellen Scannell who praised the talent and commitment of the fourteen-strong cast. She emphasised the importance of what can be achieved through drama at Alyth, observing her cast members develop a real sense of self-belief over the four months of rehearsals. This was echoed by Jay Carlin who played Gus in the comedy “It’s given us something really inspiring to come to every week, it’s been more than just a production, I’ve met new people, made friends and grown in self-confidence”.