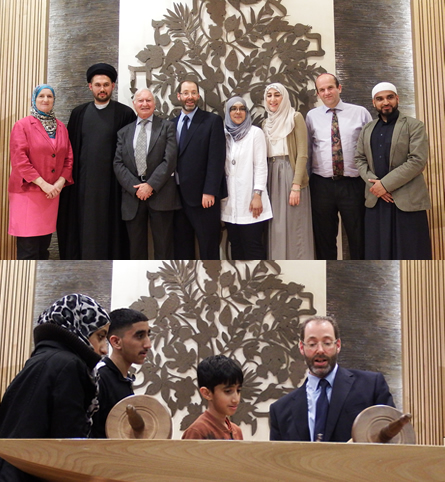 Alyth Synagogue hosted its third Kosher Iftar (the breaking of the fast each evening at sunset during Ramadan) on Thursday 16 June, the latest in an ongoing interfaith programme it has worked hard to create, establishing itself as a centre of innovation for long-term Jewish interfaith relations. It’s where the first Kosher Iftar took place, it’s where London’s new Mayor Sadiq Khan has come to learn about the Jewish community, its religion and traditions and it’s where joint study, social and welfare activities with local Christian and other faith communities take place.

Much of what Alyth does focuses on meaningful long-term relationships: The Kosher Iftar is a joint initiative Alyth have run since 2014 in conjunction with the Big Iftar, and one in which many synagogues and churches nationwide are now participating in by hosting similar evenings. The Muslim month of Ramadan is traditionally a time of reflection and peace and when breaking down barriers, sharing and strengthening community relations are encouraged. It provides a perfect opportunity for local communities to come together and foster genuine and respectful understanding and Alyth is delighted to send out a hand of friendship each year.

By holding regular joint events, members of both communities are developing meaningful social and cultural ties despite current events and issues. The focus is always on what brings these two Abrahamic faiths together in mutual learning and tolerance rather than political differences and this creates paths to combat Anti-Semitism and Islamophobia.

Sheikh Sayed Ali Abass Razawi and Bagdad-born Edwin Shuker (Member of the Executive of the Board of Deputies) were discussing the evening and together they agreed “We are not starting a new relationship; we are rekindling an old bond”.

Julie Siddiqi, said “Tonight we come back to Alyth to greet our friends and recognise that those friendships are developing into something extremely powerful. The Jewish and Muslim communities can learn much from each other. Many of the issues and challenges we face are mirrored in our respective experiences. Tonight we can see at first-hand the overwhelming appetite from both communities for continued collaboration.”

Much work has been done by Alyth’s Interfaith Group to create grass-roots dialogue and engagement with other faiths as well over the past few years and Alyth firmly believe this engagement is crucial. Alyth understand that religion can divide communities and have focused on building bridges and developing mutual understanding, tolerance and friendship with many different faiths both locally and at a national level. Representatives from Muslim, Christian and other faith communities are often invited to take part in Alyth’s services and run study sessions. One such guest is Imam Qari Mohammed Asim MBE, who ran an enlightening and packed-out discussion alongside Rabbi Mark Goldsmith during Yom Kippur focussing on how religious communities support our teenagers.

Alyth’s relationship with local Christian communities is also extremely important. As well as jointly running the winter shelter for homeless people each year, alongside Golders Green Parish Church and Homeless Action in Barnet, many other events and activities form part of the Alyth programme. Archbishop Kevin McDonald addressed the Alyth and St Edward the Confessor communities as Alyth hosted a 50th anniversary celebration service last October for the declaration of Nostra Aetate concerning the relation of the Roman Catholic Church with non-Christian religions. Archbishop Kevin McDonald’s message was clear: “We have a mutual acknowledgement of connectedness which is so important. … We look forward together, we hope together and we have faith in the future together”. Rabbi Maurice Michaels was “so pleased with the huge turnout from both the synagogue and church communities. The creation of long lasting interfaith relationships has enabled this to happen.”

Both Rabbi Maurice Michaels and Father Tony Convery led the service which celebrated the fostering of bonds of friendship, mutual understanding and appreciation. Father Tony Convery commented “It sums up where we have reached so far with our interfaith relations, it’s a good place to be.”

Alyth has striven to create dialogue with other faiths as well, working together to build a society rooted mutual respect, openness and trust. Rabbi Maurice Michaels, who works tirelessly to instigate interfaith activity and represents the Progressive Jewish community on the Interfaith Network for the UK has organised a series of discussions (during Interfaith Week in November) on Jewish and other faiths’ perspectives on particular topics such as a liturgy, the unity of God, value systems and common origins with local Christians, Hindus, the Baha’i community and Zoroastrians. Rabbi Maurice is also a prominent member of the East London Three Faiths Forum. As part of this organisation he jointly ran a successful programme in May in with an Iman and a Vicar to discuss food and fasting.

Rabbi Mark Goldsmith explained that “Working across communities is so important and this week’s Kosher Iftar was a wonderful example of our growing local interfaith connections. We were able to welcome Muslim guests who had never been to a synagogue before and had come from very close by- in the surrounding streets. One of our Iraqi-born members discovered a Muslim guest who came from her own home town of Ahwaz in southern Iraq, and was delighted to discover that they live only one street apart in Golders Green. It’s this local grass-roots connectedness with our wider community and the mutual understanding and respect of each other’s faiths that we are striving to develop. It takes time but it’s in Alyth’s DNA – we have a warm welcome for all.”