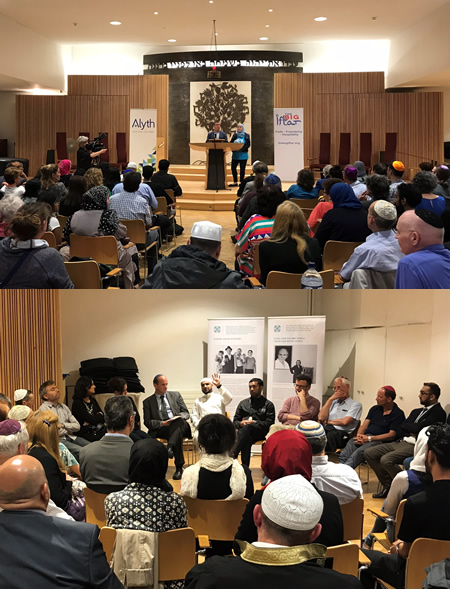 During the Muslim holy month of Ramadan, for the past five years, Alyth Synagogue has invited their Muslim neighbours to join them for an Iftar, a fast-breaking meal with learning and prayers at the synagogue. The first event was held under the leadership of Alyth’s Interfaith Group, Rabbi Maurice Michaels and the Big Iftar, led by Julie Siddiqi and most of the Muslim guests were involved in national efforts to build bridges between communities. Over subsequent years Alyth has worked hard to ensure that it is local Muslim communities, the work and school colleagues and friends and neighbours of synagogue members who are the main attendees of the Iftar.

On 30 May 2018 members and leaders of the Islamic Centre at the Hippodrome, Golders Green, North Finchley Mosque, Cricklewood Mosque, Hendon Mosque, the Ismaili Jamat in East Finchley and the Albanian Muslim community who meet in Frognal, were among the 160 Jews and Muslims who came to Alyth for the Iftar.

Muslims and Jews shared an iftar at their local synagogue.

Displayed around the synagogue was the Yad Vashem exhibition “Besa – A Code of Honour” which tells the story through testimony of the many Albanian Muslims who saved Jews from the Nazis during World War II. The call to Muslim prayer was made by Imam Mehmet from the British Albanian Muslim Community. After Muslim prayers in Alyth’s Leo Baeck Hall there followed a shared dinner. Guests had the chance to see the Sefer Torah up close and learn about the symbols of the Jewish home, life cycle and festivals and to talk with and meet members of the synagogue.

Rabbi Mark Goldsmith said: “This was a remarkable year for the Alyth Iftar, the depth of local connections that have now been made by our interfaith relationships means that we are truly welcoming our neighbours to share hospitality and learning. It is getting more and more possible to speak together about the issues that are difficult for Jews and Muslims, as we get to know each other. We plan a dialogue about Israel with each other in the near future.”

Rabbi Hannah Kingston said: “The Alyth Iftar this year was so full of Jews and Muslims who were looking for a better vision of the world while we live with a background of strife in the Middle East. My teaching with Remona Aly showed that the women we admire, whether Jew or Muslim, were brave and committed to justice together with being role models to others.”

Sultan Ahmed from Islamic Relief said: “It was an honour for me to have shared stories from our past history and to learn about the heroes from Judaism. I was fascinated and really enjoyed it.”

Nadim Pabani from the East Finchley Ismaili Jamat said: “The hosting of Iftar was a wonderful gesture of friendship between faiths and I hope that it was felt as having been reciprocated on the night – and inshallah will continue to be felt long into the future!”