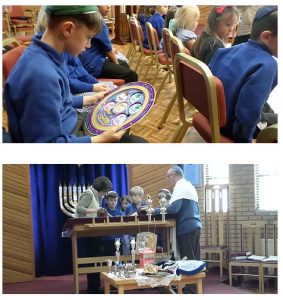 Newcastle Reform Synagogue receives a large number of requests from organisations throughout the North East and beyond who want to visit the synagogue or to arrange for someone from the synagogue to go out and talk to them.

This is in part a consequence of geography and demographics. The North East Jewish community has declined significantly over the past few decades. Now Newcastle Reform Synagogue and the Orthodox United Hebrew Congregation are the only synagogues between Leeds (100 miles to the south) and Edinburgh (120 miles to the north), apart from Darlington, which is too small to accommodate a class of school children, and the Ultra-Orthodox community in Gateshead which does not offer visits.

Brenda Dinsdale explains how these visits work and what their impact has been.

After retiring in 2008, Ruth Heyman started to help with hosting educational visits to our synagogue and gradually took over their coordination. The synagogue has built up a small dedicated team of mainly retired people who are happy to welcome visitors, talk to them about the synagogue and what goes on there, and demonstrate how Shabbat and festivals are celebrated in the synagogue and the home. We also get requests to talk about the Shoah (Holocaust) to both adults and children from age nine upwards.

Ruth has calculated that since 2009 the synagogue has hosted 382 visits from 198 different organisations. Some schools have visited several times with different groups of children and many return year after year. There have also been visits from children and adults with special needs, cubs, scouts, child care students, trainee teachers and priests, university students and adult education groups. Nearly 13,000 children and their accompanying adults, and a further 250 adults, have come through the synagogue doors. That’s almost 15,000 adults who have learned about Judaism, and, more importantly, come away with a positive view of Jews and Judaism which they can disseminate to family and friends. In addition, several members of the team have been out to visit schools and either talk to individual classes or address whole school assemblies on Judaism or the Shoah. In an area (the North East region and Cumbria) with a total population of little over three million, this makes an appreciable impact on the wider community.

In the last academic year the synagogue hosted a record 58 visits from 46 different schools, a total of approximately 2070 children and their accompanying adults, including a 50% increase in the number of visits from secondary schools and an almost 30% increase on the previous year’s total. Three of these visits were from groups interested in learning about the Shoah; they responded well to hearing personal stories of refugees and survivors and asked many thoughtful questions.

As the team of volunteers becomes more experienced, we find that the children we welcome are more responsive to our presentations. We emphasise the importance of good preparation before the children visit us, so that they can recognise the main features of a synagogue as soon as they enter it.

Our visitors come from all over the North East region and Cumbria, not only from Newcastle itself and the other boroughs of Tyne and Wear, but from as far away as Redcar, 60 miles to the south, Berwick upon Tweed, 66 miles to the north and Cockermouth in Cumbria, 86 miles to the west. A few years ago, we even welcomed all the 42 pupils of two small primary schools from near Lockerbie in Scotland. The range of schools which visit us reflect the varied landscape and population density of the region, from large urban comprehensives to small rural schools with only a dozen children spread over the whole primary age range. As an example, the half dozen or so children of Holy Island First School normally travel across a causeway to the mainland to attend lessons with the 30 or so pupils of Lowick First School, but are taught separately on the island when it is cut off by the tide.

As several teachers have said to us, many of these children come from communities which lack cultural diversity; most of them have never met a Jew before, so it is important for us to counter possible prejudices and preconceptions by contributing to these children’s knowledge of unfamiliar religions and cultures.